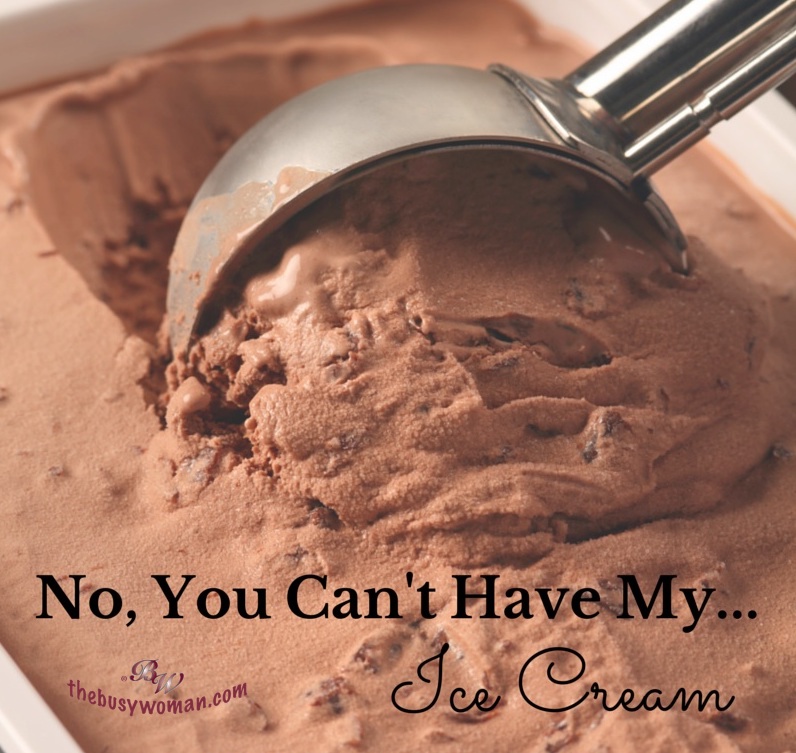 One night, hubby and I went to a friend’s house for dinner (we’ll call her Lee). Lee needed groceries, so we picked her up at her house and went together. While at the grocery store, I decided to get some ice cream. I grabbed a medium-sized container of coffee ice cream and asked her what flavor I could get for her. She chose chocolate and mentioned she also had some at home.

Later on, one of her friends (well call her Fee) came to join us. We made dinner and then came time for ice cream. Fee, opened up the freezer door and grabbed the coffee ice cream as her own and said, “Mine!” I had no trouble replying, “No, you can’t have my ice cream.” Fee said, “Why do YOU get the coffee. That’s my favorite.” I replied, “Because I bought it for myself. But, I’ll share.” I then removed it from her hand and scooped a 1/3 of MY coffee ice cream into her cup to which she complained that I was stingy.

Why do so many of us have trouble setting boundaries for others and ourselves? Everyone has their own stuff to deal with. It’s how you handle that stuff that matters. And this woman’s stuff was coming out all over the place. Somehow it took someone messing with my coffee ice cream to make me stand my ground and place boundaries around my needs. If it is almost anything else, I freeze. Let’s see what happened in the next situation.

After dinner and ice cream, Lee had a few drinks in her and started sharing which eventually turned into a rant. During her rant, she indirectly insulted me. I didn’t say a word. Instead, I sat there, in the kitchen, amazed at what she was saying and how she was winding herself up into anger and being quite rude. I couldn’t help but empathize because she ended up in tears. It was all misplaced emotion that I knew was from something else going on.

On the way home, I wondered why it was so easy for me to protect my ice cream and so difficult to protect my feelings. Ice cream is a tangible product. The question, “Why do you get the coffee ice cream,” had a tangible answer, “Because I paid for it.” There. Simple. Easy. But how do we do that with our feelings?

In another scenario, I was informing the assistant at a medical facility about my allergies to keep the physical therapist from using a cream that could send me into Anaphylactic shock. I told both ladies three times previously but still ended up having cream with unknown ingredients on my back that burned. As I started to explain how important it was, the assistant responded, “Well we haven’t killed you yet.”

I was so stunned that I hesitated and didn’t say anything for a moment. She wasn’t referring to a thing, or an object I could use in the rebuttal. After explaining what a physical response to an allergen would do to me, I got another, even nastier response as she left the room. I just sat there in shock, not knowing what to say or do. Even though I really wanted to get up and run out of the office, I couldn’t.

The owner came in and asked how I was. I told her, “I’m very upset,” and as tears started to pool in my eyes I finished with, “and I really just want to leave.” She asked what was wrong and I told her. At first, she was defensive and verbally attacked me. Then, as we talked, her shoulders seemed to lower, and she ended up crying and apologizing.

When I got home, I realized that I don’t have to stay silent. I can set boundaries to protect myself. There are things I can say when disrespected, humiliated, or bullied. So I came up with “Saving Grace Statements ©.” These are statements that can be made with grace. They are straightforward and honest. They are not rude even though some might say they are. Your tone is a part of the equation. You can be firm and upset. Just try not to be sarcastic or overly aggressive.

Let your conversation be always full of grace, seasoned with salt,
so that you may know how to answer everyone.
Colossians 4:6 NIV

At any time, you have the right to walk away from someone who is disrespecting you or being unpleasant. In this case, there are several Saving Grace Statements © above where after you say it, walk away.

Another scenario is in a work-related situation. Someone told me a story that I could relate to very well. She was new at her job, and one of the other employees walked up to her and said,
“Stop working so hard. You’re making me look bad.”
Her reply, “I’m not the one making you look bad. You’re making yourself look bad. Don’t project your issues on me.” Then she walked away. “WOW,” I thought, “What a great Saving Grace Statement ©!”

What are some other Saving Grace Statements © you could add here that would not dishonor God but would set boundaries when the need arises?

Do you set boundaries for others? I’d love to hear your suggestions.

©2014 The Busy Woman
All Rights Reserved.