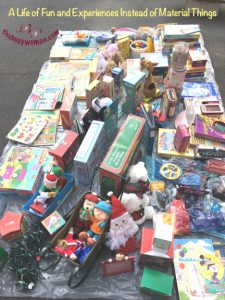 Do you long for more time for fun?
Do you feel like all you do is take care of the house, car, yard, material stuff?
Do have trouble relaxing because there’s always something that needs to be done?

The Beginning – Lack Of Material Things

Back in 1985, I was often alone with a new baby while my husband worked long hours. I went back to work when our first-born was around two years old. My husband, my mom, or my neighbor watched our daughter while I worked. I realized after a while that I wanted to stay home with our daughter and ended up starting a daycare.

I was very organized, so having structure in a home daycare came naturally for me. After a while, daycare parents started asking me how I keep such a clean home while taking care of so many children. That’s when I started to teach organizing.

My second child was born shortly thereafter and I had to get even more organized.

The one thing I know is that life was getting more complicated and busier. This whole take on minimalism isn’t new. Back at the beginning of my married life, most of us in our neighborhood had less stuff and our homes were neat and tidy. More than 50% of us stayed home with our children. We got our exercise from doing yard work and housework. We had free time and family time. The kid’s playtime consisted of bouncing from home to home.

There wasn’t so much stuff that we were spending most of our time managing it. In the mid-90s, we moved to a new town for about four years. During that time, the kids my children played with had video games and material things coming out of their ears. I fought materialism for as long as I could. But, the kid’s friends would invite them over to “watch” them play video games. It was the weirdest thing. So, our Uncle Dan decided that the kids needed the fun stuff their friends had.

And So It Begins

I put time limits and restrictions on video game time. The children could earn movie or game time by completing chores or schoolwork. If everyone completed all chores and schoolwork, we would all sit and play Sonic the Hedgehog or watch a movie together. The incentive worked well. We were like a well-oiled machine that had tons of fun.

By the way, we weren’t inside that often. We also spent time fishing, going to the beach, kayaking, and doing a lot of other outdoor activities.

As the children became older and more self-sufficient, they began to buy and collect more and more material things. I fell into it too; keeping things from my childhood and my children’s childhood for the day I had grandchildren, just like my father. I also started to collect memorabilia from my childhood. Add to that my addiction to office supplies and the garage filled with boxes of stuff.

It’s taken many years to finally stop moving the stuff with us everywhere we go. I have one more round of decluttering and think I will be done.

What’s the point of writing this to you? It’s so easy to get caught up in the world’s view of consumerism that we give up time and self for the things of this world – material things. Even as a Type A, then an organizer, I fell into materialism. It’s easy when it happens in such small increments that you don’t realize it’s happening.

We say things like, “Oh, I can get this one little thing.” Or, “I need that,” when the need is not really there. I got rid of about one hundred file folders and hanging file folders because of that false sense of need. Now, it’s getting easier and easier to let it go – the stuff that weighs me down.

Take back your time. Get rid of material things. Give yourself a life of fun and experiences.

How? It often takes a significant event in life for us to change patterns and habits. It’s something I wrote about many years ago. Get fed up enough to change it. Take a look…a hard look at the cluttered places in your home and garage. If you have a storage unit, you know it’s a problem.

1. Visualize your life with and without the stuff.
2. Visualize moving the stuff. Do you really want to move it?
3. Get serious with yourself. Stop making excuses!
4. Call in reinforcements. Somehow friends have a way of helping us see the silliness in things like keeping Marbleworks for 30 years even though you never took it out to play with it.
5. Block the time to go through a few boxes at a time.
6. Power through as quickly as you can. If in the blink of an eye you haven’t used it in years and don’t want to move it, put it in the “to go” pile and don’t look at it again.

You don’t have to be moving to visualize moving. It’s a reality check and…one day your family or friends will have to do something with your stuff. Why not deal with it now and live a more freeing life? I’m working towards that goal. Won’t you join me? Let me know in the comments below so we can support each other.