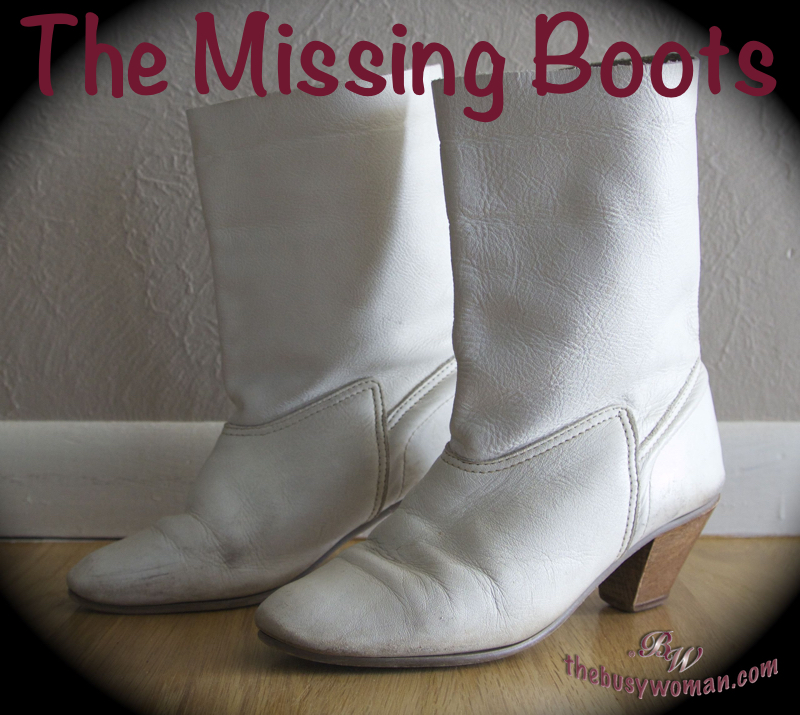 I posted a question on my Facebook fan page: How old is the oldest pair of shoes in your closet? It elicited quite a response! As I started to type my response, a beautiful memory flooded my mind and the story of The Missing Boots was born.

I wonder how many of us still have old shoes or boots in our closets due to sentimental reasons. I have a pair of boots that are about 34 years old. Why? My shoes and boots used to go missing every so often. It was the weirdest thing.

The Story Of the Missing Boots

I was a Type B Messy as a kid. My room was constantly messy. I can’t tell you what my issue was, other than I think I didn’t want to miss out on anything, so I’d drop and go.

My mom used to tell me to keep my room clean so I wouldn’t lose my things. She would always say that if I put it away, I would know where it was when I needed it. You know the saying, “A place for everything and everything in its place”? Both parents taught me that saying.

There was another side of me too, the organizer side. I can remember rearranging my room at least 4 to 6 times a year. And while I was at it, I’d organize the inside of my drawers.

During my teen years I continued to bounce between messy girl and organized girl. It was during these years that some of my shoes and boots ended up missing. I didn’t have so many that they could easily get lost. After all, I couldn’t afford to have a ton of shoes or boots. And I was never that much of a shoe girl. I was more of a cowgirl boots kind of girl. I also had platform shoes to make me taller back in the day. But I pretty much wore the same few pairs of shoes or boots.

One day, I remember going to my closet and reaching in to grab my white boots. They were gone! I hollered from the closet, “MOM! Where are my white boots?!” And if you saw my closet as a teen, it wasn’t so large that I couldn’t see everything at a glance. Mom replied (from the other room mind you), “You probably left them at Jill or Debbie’s house.” I asked the girls but they never had them.

How in the world were there missing boots?! I don’t recall taking them off anywhere. I didn’t lend them to anyone, (that I could recall). So how in the heck were they missing? Eventually, I gave up looking. 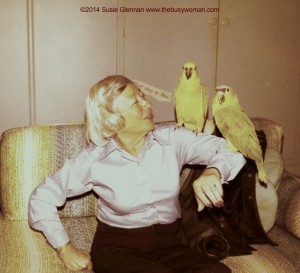 Here’s where my beautiful grandma comes into the story. One day, grandma told me she liked my boots and said that maybe she’d borrow them sometime. I either told her okay or told her where to buy some. I cannot remember but both of those come to mind.

And I seem to recall asking grandma if she borrowed my boots. But I honestly can’t remember what she said. After all, this IS more than 34 years ago. Some things just aren’t important to remember, (until you want to remember so you can write a story).

My grandma was an amazing woman who emigrated from Russia to France, then from France to America.  That’s a beautiful story for another day. People were just… well… so beautifully different back then.

Back to my boots! Grandma was 4’ 10” and had tiny feet like mine. She was fun, lively, could sing opera, and when she took me to the mall, she would wear me out. She was the cutest, sweetest little grandma anyone could have. Even my neighbors growing up loved her, so much so that they all came to her funeral when she died.

My grandma died in 1987 at the age of 82. That was one of the worst years of my life. But going through her things was a true treasure hunt!

I didn’t know where to start when we got there. Her apartment had two entry doors. One was at the end of a hallway, in her bedroom. She dead bolted and blocked off the door so she could put racks in the little hallway. There I saw shoeboxes galore! My grandma had a shoe fetish! How did I NOT know this? Maybe I *did* know and I don’t remember. That’s not important.

What’s important is that I went through that hall looking at all of her shoes and accessories. TREASURE! I found treasure, I tell you… but none of “my” shoes. (Sigh) My mom said to put aside any of the items I might like to keep. So I just cordoned off the entire hallway! NO, I didn’t! Not really… I wasn’t into “shoes” back then either.

Next I moved to her regular closet. I opened the two doors and hollered (in the tiny apartment), “HEY! MY SHOES!!!” My mom came over and said, “What? What are you talking about?” “My SHOES!” I exclaimed! “My missing boots and shoes are all HERE! Grandma took my shoes!”

Mom and I started laughing and crying so hard. The men you ask? The men finally came over and asked what the commotion was about. The story didn’t seem to elicit the same response for them as it did for us girls. I’m sure you understand. You’re probably sitting there like mom and me saying, “HER SHOES! Grandma took her shoes!” Then smiling with us as we realize how amazingly cute my tiny, little grandma was.

And I have to tell you that almost all of grandma’s things were in pristine condition. As a depression-era woman, she was taught to take care of her things because she could not easily replace them.

But can you imagine my surprise when we went over to clean out her things and there, in her closet – several pairs of my shoes and boots?!?!?! I took home several pairs of shoes and accessories that night. And I never really wore any of them except for my own. I did end up with two or three pairs of white boots, after all, was said and done. (They were all mine in the first place.) However, to this day, I only kept the one pair of boots.

There came a time many years later when I wanted to wear the boots. They were GONE! I flipped out just a bit before I remembered that my youngest daughter asked if she could check out my shoes. Apparently, like my grandma, she too has a shoe fetish. I asked her if she still had them, to which she said yes. When she moved, she made sure to give them back with a little of her own history attached. I think I’m going to see if I can get them restored at the shoe shop. I’ll let you know. 🙂

In the meantime, do you have an old pair of shoes you kept for sentimental reasons? Tell me about them in the comments below! I’d love to share your special memory with you.

You can also read other people’s stories here: What is it about shoes that make women HAVE to have them?